We packed up the landcruiser and a keen instructional team with the plan of heading to Samburu for some staff rock climbing training. A wild and unspoilt area which has very much the element of adventure about it, Samburu offers some fantastic climbing. Its an area RVA is very familiar with having run and delivered school trips on the majestic Ololokwe and also climbed on the Cat and Mouse in the past. This time though with the team getting much more familiar with rock climbing we were able to tackle both established climbs and also start to put our own names to first ascents in the area. 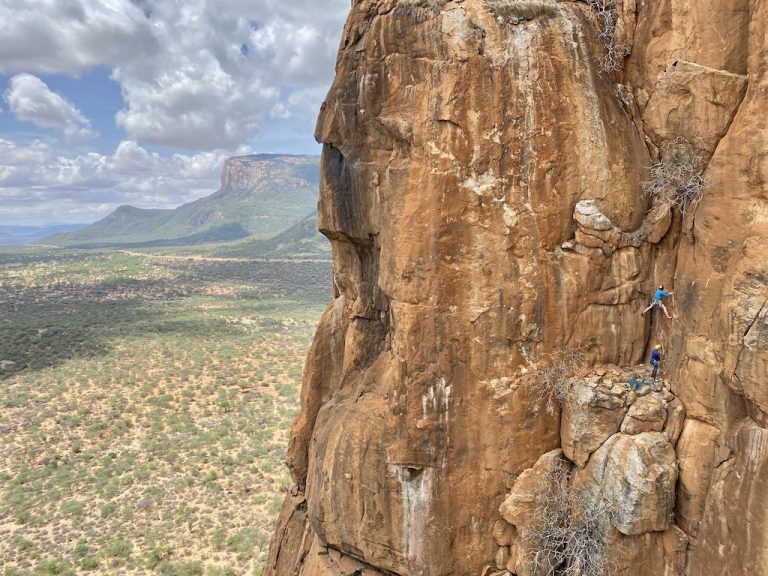 The team have been actively climbing and at the level for further assessments and qualifications so we had a focus on delivering training on some more advanced elements of independent climbing. We set up camp at the familiar Sabache camp which has developed into a pleasant site with facilities and nice pitches to camp on. When we first came here several years ago, it was an empty valley save for the Samburu grazing cattle and sheltering from the heat.

There has also been some developments in the rock climbing in recent years with two good crags being bolted for sport climbing but the area still has a wild feel to it which is why we love it so much. We concentrated at first on the cliffs of the Kirch valley that surrounds the Sabache camp, the start point for those heading up to the unique summit plateau of Ololokwe. It’s a brilliant mix of steep compact slabs and splitter cracks giving some fantastic routes and the team were quick to start dispatching pitches left right and centre.

Jo Trendell also managed to put up a new line called ‘Kopshmirsen’  – German for headache. This was on account of being almost unavoidable not getting your head stuck in the large roof crack on the route. We all enjoyed the first day but certainly noticed the stark change in temperature while climbing there compared to the usually cooler climbs we contend with at home on the Laikipia Plateau. The evenings were spent by the fire cooking and chatting through the events of the day and preparing kit and plans for the next day’s exploits.

We decided on a one full ‘adventure climbing’ day on the huge rock towers named locally as the Cat and Mouse. We had two good reasons for having this as part of our training: one was that you can’t substitute or create real decision making. Climbing on new, often undocumented ground, channels the mind into having to make real decisions almost all day long as to whats safe to climb, how to climb up, how to arrange ropes, manage risk and in these parts, keep a wary eye out for Elephants, Lions and snakes – not an issue Jo and I often face in the Scottish Highlands!

The second reason is its fun. It’s great fun to be out on untrodden ground with a group of friends who you trust and enjoy their company. Its where great adventures happen. We had a incredible day with new lines climbed and a much bigger and higher climbing venue that people are used to. The team established four new climbs on the Cat and certainly found some full adventure negotiating and testing some routes. We also got the team onto some multi-pitch terrain climbing on both the Cat and Mouse. An attempt was made on the Mouse’s original route which is a stiff 6c. What’s also very impressive was that the route was first climbed by Ian Howell a prolific new router across Kenya in 1968. But the adventure lives on to this day with the area catching the attention of Alex Honnold who has one of the three established routes on the Mouse to his name, the amusingly named ‘Mouse of the Rising Sun’ as it is a spectacular spot to watch the sun come up.

It’s certainly fair to say that its quite a tough area to operate which is testament to the RVA team’s resilience and sense of adventure to come back in one piece to the camp fire in the evening. To say one piece though I think everyone was peppered in cuts and scratches as its unavoidable getting cut to ribbons on the dense thorny bushes you have to bash through to get on and off climbs. Unless you have experienced these bushes, it’s hard to explain just how sharp they are – just another sign that everything has to be pretty tough to survive in this semi arid area.

And it’s tough up there at the moment as the entire area is suffering one of the worst droughts in history. Thankfully, it did start to rain while we were there. The large black clouds developed over the valley and some large drops fell but as soon as they hit the ground it was like water falling on hot metal it just fizzled out back to bone dry. Hopefully some more will come as the pressure on humans and wildlife there is very hard. You can often tell when things are tough as the Masai move towards Nanyuki and Mt Kenya in search of grazing ground. 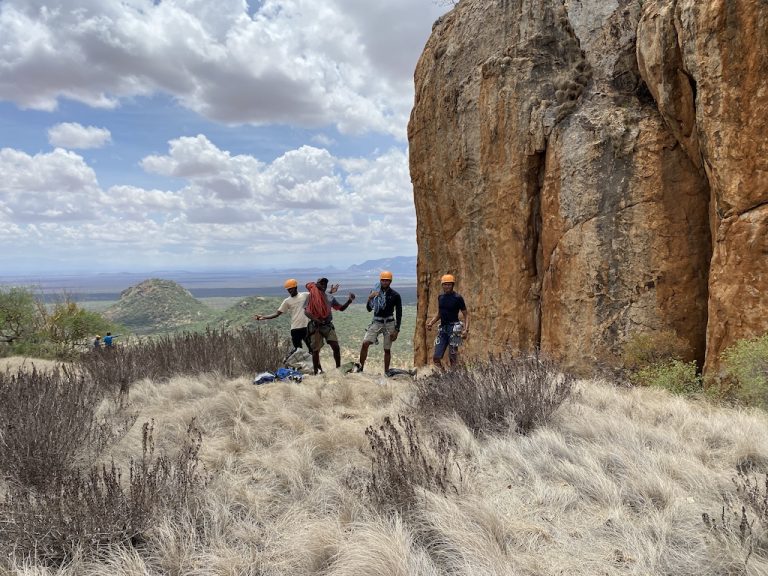 We spent the last day creating a mock assessment scenario for the team. Taking to one of the local cliffs to the camp, each person would lead a sport (bolted) climb and a traditional climb (placing protection). They did this very well and looked good ticking off the climbs and using well thought out and practiced rope work. There was even time at the end to try some hard climbs that were out of our range to see how they felt with the old adage ‘if your not falling your not trying’ could be played out. Although that old adage needs to be tempered with, some good decision making and risk management which is something our team is able to do due to the work they put into their craft.

With that done we loaded up the cruiser for the long haul back from the semi-arid plains back up the hill to Mt Kenya and home. Although there is still much to explore in this area we can also dream a little about the next trip and perhaps towards the Ndoto (Swahili for “dream”) Mountains way north of where we were and up near Turkana, the cradle of mankind with the mystical Mt Poi for a future adventure. 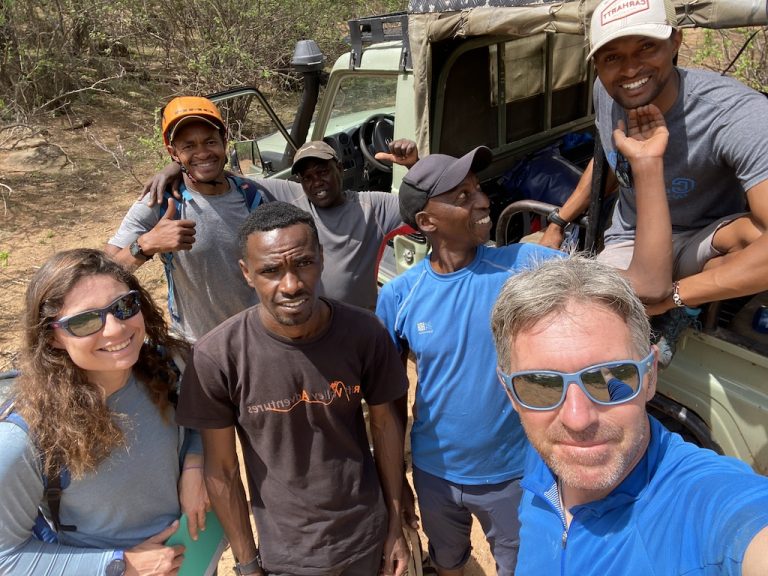 From Singapore to the Savanna on a school trip!

This website uses cookies to improve your experience while you navigate through the website. Out of these cookies, the cookies that are categorized as necessary are stored on your browser as they are essential for the working of basic functionalities of the website. We also use third-party cookies that help us analyze and understand how you use this website. These cookies will be stored in your browser only with your consent. You also have the option to opt-out of these cookies. But opting out of some of these cookies may have an effect on your browsing experience.
Necessary Always Enabled
Necessary cookies are absolutely essential for the website to function properly. This category only includes cookies that ensures basic functionalities and security features of the website. These cookies do not store any personal information.
Non-necessary
Any cookies that may not be particularly necessary for the website to function and is used specifically to collect user personal data via analytics, ads, other embedded contents are termed as non-necessary cookies. It is mandatory to procure user consent prior to running these cookies on your website.
SAVE & ACCEPT